How do I pay myself super now that I’m self-employed? 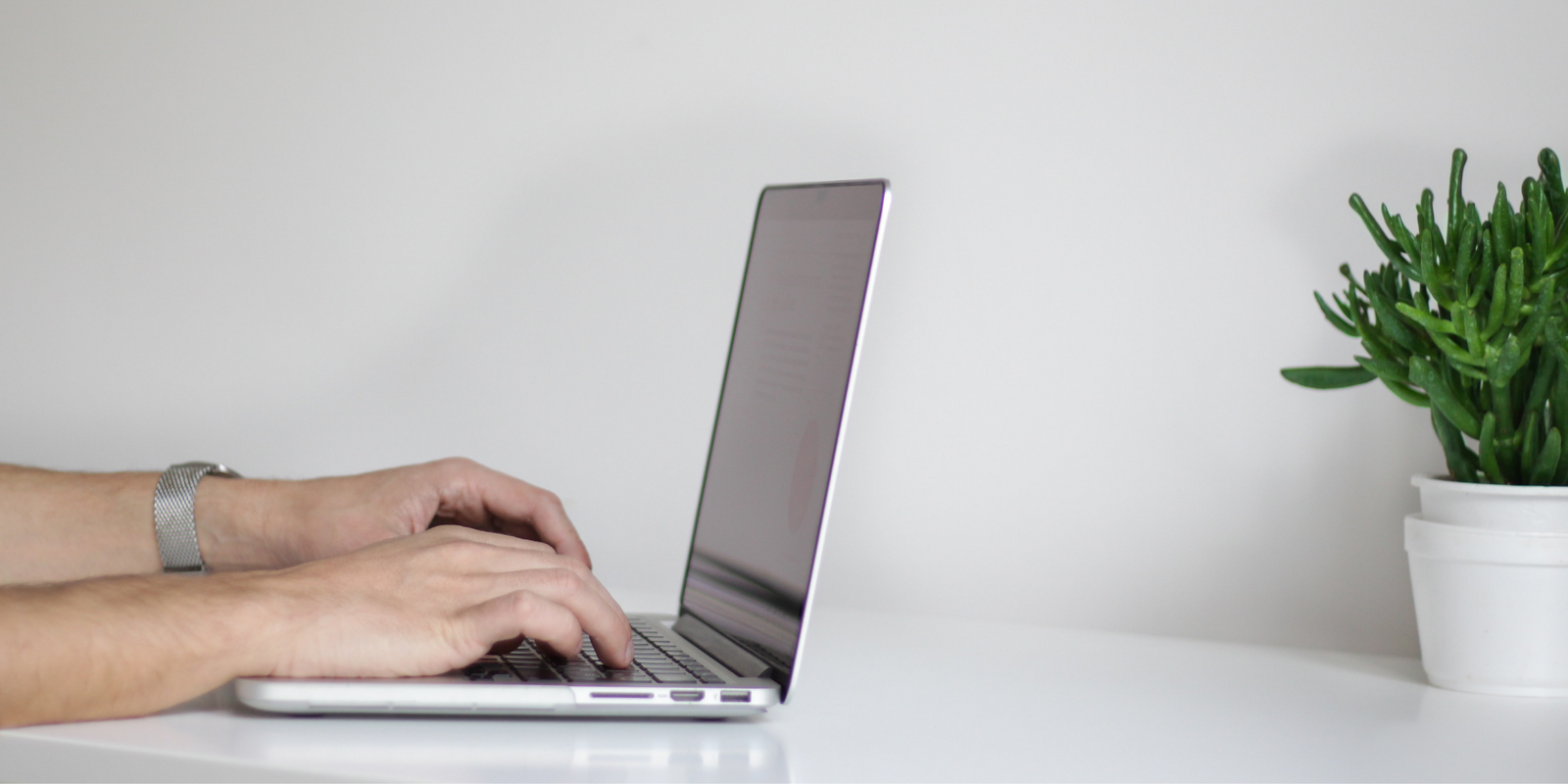 Being self-employed can be one of the most liberating decisions you’ve ever made.

It gives you the opportunity to grow in your field and the autonomy to work on your own terms.

…like your superannuation – which can often feel complex, especially if you’ve only ever had someone else doing it for you (like an employer).

However, you shouldn’t have to be a finance expert to do super properly when you’re self-employed.

Just like all the other bits of your business that may have been overwhelming at some point, you’re about to master this one, too.

It’s time to shake that “ugh…super” feeling and regain control of your money.

And you’re about to do it in just 3 steps: save, contribute, and claim.

What’s the point of super anyway?

The short answer: Having dollars in the bank when you can no longer work means you can stay in control.

That’s the real power of superannuation. Seriously. Try to find one retiree who says “I wish I had less super” – mission impossible.

However, what no one really teaches you, is that your superannuation isn’t just about having money when you’re old.

It’s also about being smart with your business and personal finances every year.

And once you have that “Aha!” moment, it’s so much easier to tackle this thing…even if you’ve been putting it off for ages.

Let’s dig a bit deeper into what that looks like…

A good place to start

‍“The best time to plant a tree was 20 years ago. The second best time is now.”
– Chinese proverb

Even if you’re ‘not a numbers person’, you still know that saving money can pay off really well.

But regardless of this knowledge, it can often be a struggle to prioritise ‘today’s money’ for your future self.

So if you’ve been putting off your super for a while, you’re not the only one who’s been standing in their own way.

But the good news is that it’s easier to just get it done if you bring automation into the mix.

Try it out without locking money away.

Under the GigSuper hood you get two accounts: a Saver account and a Super account. Hook up the Saver account to your bank and start saving weekly.

You can access the money in your Saver anytime. Once a quarter, we’ll transfer money from your Saver into your Super to build your retirement savings.

Even if you start by setting up a direct debit to save just $10 a week – you’ll quickly rewire your brain to put your future self front and centre today.

Then, as you work out more accurately how much super to pay yourself, you can increase the weekly amount and it won’t feel as painful parting with that money.

Even small, incremental amounts can make a huge difference by the time you reach retirement age. Or, stashing away slightly more each week could mean you retire earlier than you thought.

You’ve totally got this – the key is just to start.

But how can you save when your income fluctuates?

This can often feel like a big hurdle for self-employed folks who feel like their work is either feast or famine.

And because money gets locked up inside super straight away when you’re an employee, we’ve been conditioned the same should be true when we go out on our own.

But you’ve got the advantage of flexibility.

One way around saving for super with a fluctuating income is to give yourself a bit of a buffer by setting up a separate bank account dedicated solely to your retirement savings.

Think about it. If you’ve got all your money sloshing around in the one bank account, it’s very hard for your brain to separate one dollar from the next.

But if you set up a special bank account for your retirement savings it can help you:

Once again, you’re in control and on your way to a cushy stash that’ll be waiting for you when you retire.

Take advantage of the system

Lots of people are totally unaware that you can use super contributions to reduce your taxable income. Which is a shame, because most of us feel like we pay too much tax anyway and we’d love a way to cut it down.

The government knows that locking money away for a really long time probably isn’t most people’s preference. So they incentivise us all to do it by giving us fiercely low tax rates inside super.

In fact, putting away super is a bit like having your very own tax haven in the Cayman Islands. (Except it’s completely legal.) 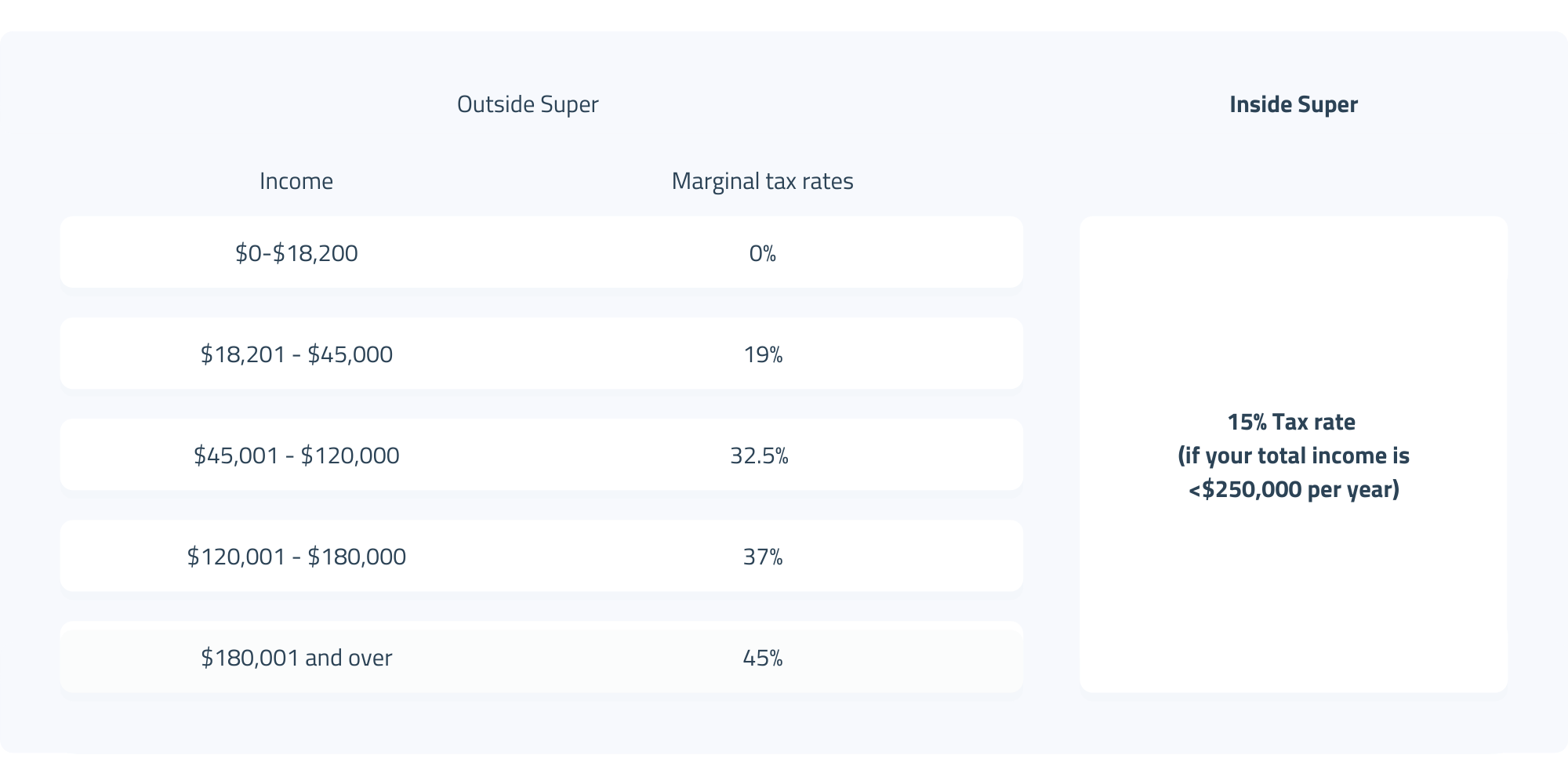 So you see, money made from earnings that’s put inside super is taxed at 15%, versus outside of super where it’s taxed at your marginal tax rate (which can be as high as 45% – yikes!).

However, when you’re self-employed and making personal contributions, it’s really important to note that if you want the earnings you contribute to super to be taxed at 15% instead of your marginal tax rate, you have to claim your contribution as a tax deduction.

Let’s say this is Alex.

She’s a 34 year old freelance copywriter who sees herself retiring at 67.

Alex earns a solid average of $85,000 a year and she also gets taxed solidly on that amount, too.

After years of procrastination, she finally decides to do something about her retirement and commits to saving $125 a week.

Very quickly, Alex notices how much less tax she pays if she starts saving inside super and claiming her contributions as a tax deduction.

She also sees how it boosts her retirement stash in the future, compared to the same investment outside of super:

‍So by saving for retirement using super – and claiming contributions as a tax deduction – Alex slashes her taxes and pockets an additional $81k in retirement savings.

And because Alex will be over 60 years old when she retires, she can access her superannuation savings tax-free.

So how do you actually claim your personal contributions as a tax deduction?

Here’s the way to do it with most funds:

It’s not hard. But in this day and age it does feel unnecessarily complicated. However, it’s an important way to keep more money in your pocket – so it’s a bit of pain, for a lot of gain.

Take advantage of the system.

Even though it can help you reduce the amount of tax you’re paying, the tedious process can put people off. Which is why we’ve automated that process.

When you set up your GigSuper account, just tell us that you want to claim all your personal contributions as a tax deduction, and we’ll automatically send you the receipt you need to claim your tax deduction come tax time.

Check if you’re eligible for the Government Co-contribution

Another thing that can feel like a hurdle to paying yourself super when you’re self-employed, is the feeling that you don’t earn enough money yet to put any inside super.

But that’s probably because nobody told you that there’s a way to get the government to put up to an extra $500 into your super account every year if you’re a low income earner and you make some personal contributions into super.

That’s right – if you’re earning less than $54,837 (in FY21) and you contribute some money to super, you can get the government to also chip in too.

Known as the Government Co-contribution, this benefit helps low income earners build up their super. And the great news for all the busy self-employed peeps out there is that there’s no paperwork involved with these co-contributions.

If you’re eligible, any government top-ups are automatically credited to your super account once you’ve done your tax return in the year in which you made the contribution. (As long as you haven’t already claimed those contributions as a tax deduction).

Stop paying too many fees

Here’s an unnerving fact: 36% of Australians have more than one super account.

This is often because people are so disengaged with their super, that when they start a job with a new employer they simply opt for the employer opening a new super account for them, rather than using the one from their previous job. And before they know it, they’ve got lots of super accounts.

But the problem isn’t so much having multiple accounts, it’s that 36% of people are paying more than one set of fees. Which may also include default insurance fees you didn’t even know you had.

Very quickly it becomes clear to see how paying multiple sets of fees over the years can significantly impact the amount you retire on.

So it’s really worth thinking about rolling all your super money into one place – into a fund that best suits your needs now that you’re self-employed.

Just make sure you consider any potential loss of existing insurance or other benefits you might have with your existing fund(s) before you consolidate your super.

The wonders of compound interest

So how does everything we’ve talked about actually come together to become the difference between enjoying your retirement, instead of worrying whether you’ll have enough money week in and week out?

The answer lives inside the wonders of compounding interest.‍

Here’s the general gist of what compound interest is…

While those numbers may not look that exciting to begin with, when you consider what happens over long periods of time, it’s easy to see why Albert Einstein called compound interest the 8th wonder of the world.

Starting with that first $1000, and letting the power of compound interest do the work without you adding in any outside investment, you can see how the money grows on its own.

Just a quick heads up that the power of compounding interest applies to all investments. Not just those held inside super.

But your money generally compounds faster inside super rather than outside of it because it’s taxed at a lower rate.

So the sooner you start saving in super, the faster your retirement stash can grow by letting the power of compounding interest do the heavy lifting for you.

You shouldn’t have to be a finance expert to do super properly when you’re self-employed.

You can get it done in just 3 steps:

BONUS TIP
Stop paying too many fees. Bring all your super together into one fund and let the wonders of compound interest grow your nest egg.

Now that you’ve got a clear plan, you can do all this with any fund. But you’ll need commitment, persistence, and manual work.

If, however, you’d just like to automate the whole process and get back to the parts of your business you actually enjoy…

…then check out how to do it with GigSuper in under 15 minutes.

You can even start with as little as $10 a week. And easily fine-tune that amount over time.