3 Types of People Freelancers Should Network With Next Year 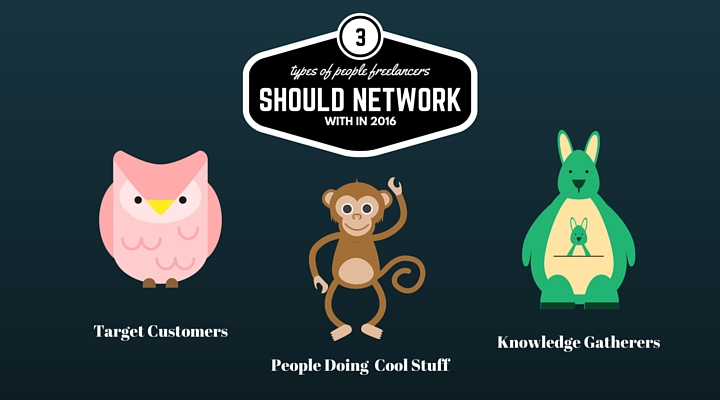 I tend to meet anywhere between 10 to 30 new people each week at various meetups across Melbourne. Most of whom I speak to are interested in one of two things: networks, the content or both.

You can spot the ones who go for purely ‘networking’ component almost immediately. Disengaged from the event’s core subject matter, they proceed to making as many introductions as they can, often drawing themselves to other primary networkers, whether they’re useful or relevant to your business or not.

At first, it feels great. You engage in what seems like a seemingly important and active conversation, but in most cases, the discussions lack any real substance. It’s not uncommon for people to feel genuinely productive networking by just talking to other networkers, whether they can add value or not. As a result, each networker receives a new Linkedin connection and mutually lofty commitments to one another that are virtually forgotten the next day.

For me, I like prefer to meet with those there for the content – the ones who have the objective of learning something new. There are three key individuals that I look to connect with at any event:

Target customers
This may seem obvious, but I how well do you really know your Target Customer? It helps to be very specific, so specific in fact that when I meet somebody for the first time, I now know in seconds whether or not somebody is the right fit for my services or not. By being specific, it makes it easier to identify their pain points, areas of interest and the events you’re likely to find them at, effectively reducing the amount of networking you need to do to generate the best results.

Cool People Doing Cool Stuff
CPDCS are a bit harder to connect to. These are the meetup organisers, the book writers, the startup founders that are spending more time making stuff happen than talking about it at meetups and events. What’s great about these guys is that they attract other interesting people towards them and as a result are great connectors. Their high levels of activitiy means that there is a good chance they might be able to use your services at some point in the future or if not, refer you to somebody else who’ll find value in it.

Mavens
Mavens are those that Malcolm Gladwell describes in his book, The Tipping Point, as “those who are intense gatherers of information and impressions, and so are often the first to pick up on new or nascent trends.” I relish the opportunity to connect with these people, as they’re a great source of inspiration for planning new and emerging service offerings.

How do you network? Do you have a target in mind when you head out of the home office or are you putting it out there, randomly hoping to see if something sticks?

Let us know in the comments!